On October 28, 2011, our Pennsylvania DPA members milk was purchased at Lehigh Valley Dairy Farms of Lansdale, PA. DPA donated 600 gallons of whole milk or 5,100 pounds to Philabundance, a member of the Feeding America network, of Philadelphia, Pennsylvania. This is the Second Harvest clean room at Madison, WI, where the cheese from Meister Cheese was processed into two-pound, family-sized packages.

With each donation made to the Feeding America network, the staff cannot express enough appreciation and heartfelt gratitude to YOU, the dairy producers, who make it possible. In January, Jim Scheuerman, Food Resource Manager of Second Harvest Foodbank of Southern Wisconsin, said, “We don’t come by cheese or dairy products very often- not like this,” Scheuerman said. Jim (the Resource Manager) “expected the cheddar would be gone in less than 24 hours.” Second Harvest is located in Madison, WI, and serves 16 counties. They help feed 141,000 people annually.

On May 22, 2012, Dairy Pricing purchased 3,165 pounds of cheddar cheese at Nasonville Dairy of Marshfield, Wisconsin. Feeding America received this donation.

On April 19, 2012, DPA purchased 1,500 gallons of whole milk from Dairy Maid Dairy Inc. of Frederick, Maryland. DPA’s buying power is with our members who sell their milk to Lanco-Pennland Quality Milk Producers in Hagerstown, Maryland. This milk was donated to Blessings of Hope of Ephrata, Pennsylvania. Blessings of Hope is a food distribution network to food banks, ministries, churches and individuals. The following statements are from Joseph Zook, Product & Relationship Coordinator for Blessings of Hope. “I wish to thank those that made it possible for Blessings of Hope to receive 1,500 gallons of fresh milk! This donation is tremendously appreciated and will put a gallon of milk into a lot of homes. It will impact many lives and many people who cannot afford to buy milk. This will be a real treat to them. I ask God for a special blessing on every hand that touches this milk!” According to Mr. Zook, this dairy donation will be distributed to 15 different sites within the Blessings of Hope network.

DPA member’s milk was purchased from Dairy Maid Dairy, Inc. of Frederick, Maryland. Blessings of Hope in Ephrata, Pennsylvania is a food distribution network who started to transport this milk on November 13, 2012. Blessings of Hope transported 1,000 gallons a week for six weeks to Lakewood, NJ, Staten Island, NY, and Queens NYC, NY. These are some of the hardest hit areas in the region. Also, two food distribution programs served over 1200 households with a cheese supplement in emergency food boxes (the equivalent of about 3,000 meals).

We are incredibly thankful for this donation and DPA’s support in the fight against hunger in our communities!

December: 18,065 lbs. of cheddar cheese was purchased at Nasonville Dairy and was divided between the Hunger Task Force in La Crosse, WI and Feeding America in eastern Wisconsin. 400 lbs. was used locally January 16, 2014: 8,000 half-gallons of whole milk and 1% milk was donated to Union Missions Ministry of Charleston, West Virginia. This donation helped supply nutritional relief to 40,000 individuals in nine of the counties whose water supply was affected by the chemical spill. The milk was distributed through local food pantries and family emergency boxes. The 55 lbs. bags are re-packaged into 2 lb. bags to be included in food parcels. Happy Helpers put a 2 lb. bag of whole milk powder in each food parcel to be exported to Haiti, Nicaragua, and Liberia July 2020 Cheese Distribution in Camden, NJ — one of the many Catholic Charities USA agencies to receive shredded cheddar cheese converted from 40 lb. blocks. 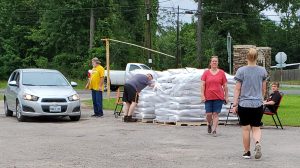 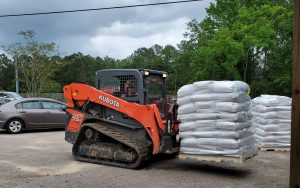